Hello from Sweden! Today's my first day at the Stugan summer workshop, where 20 game devs (including myself) are going to be working on our respective projects for two months. It's a beautiful place full of beautiful people, and I'm SO EXCITED to be here! 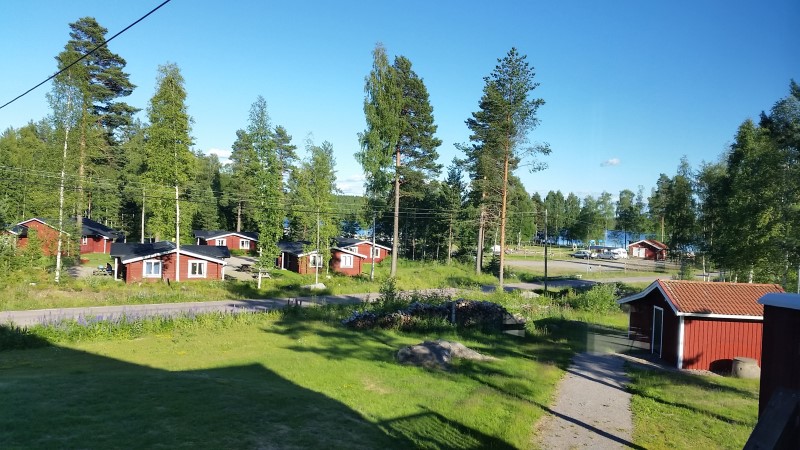 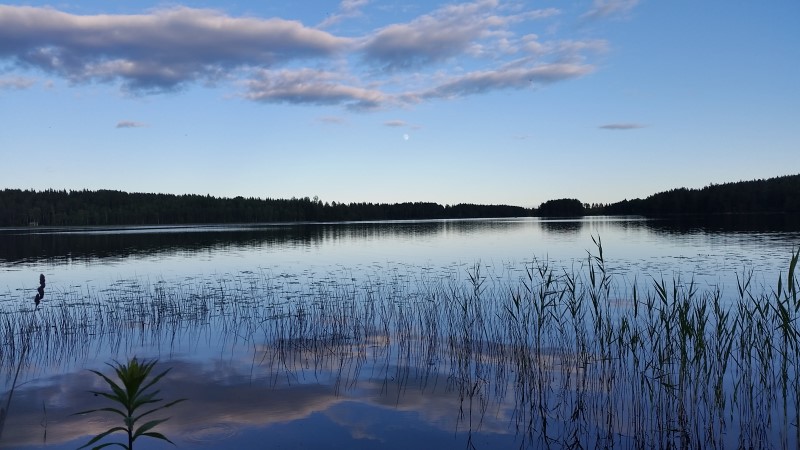 Note that these pictures were taken at like 9pm. The sun barely even sets here. I am very confused.

I've been thinking a lot about what I want the emotions of Crescent Loom to be, prompted by this great talk by Erin Hoffman where she deconstructs games by looking at the emotions at each action in its gameplay loop. She points out that the experience of play is not a single feeling, but a looping cascade of different emotional states. Playing a game is like listening to a song. The experience can't be described by any one single note — you have to look at how elements interact and repeat over time.

This framework is especially salient for learning games because humans learn through stories and remember through emotion. If we want to take full advantage of what games have to offer, we need to weave compelling emotional journeys into our gameplay loops.

So: what are the emotions of Crescent Loom? So far, I've been vaguely building towards this feeling of "divine creation", the idea of molding life out of dust and filling a ocean with colorful, elegant creatures — with maybe a hint of Frankenstein thrown in.

However! The lived emotional experience of new players is far from that; it's closer to slapstick, a farce. They cobble a creature together and it twitches, writhes, and dashes itself against the rocks. "Why have you created me, master?", it would cry if it had a mouth. Browsing the library of player-created creatures reveals multitudes of such gibbering biological messes.

To warm up, I first did a graph for a similar creative-sandbox game called Kerbal Space Program, where you construct rockets and try to put them into orbit: 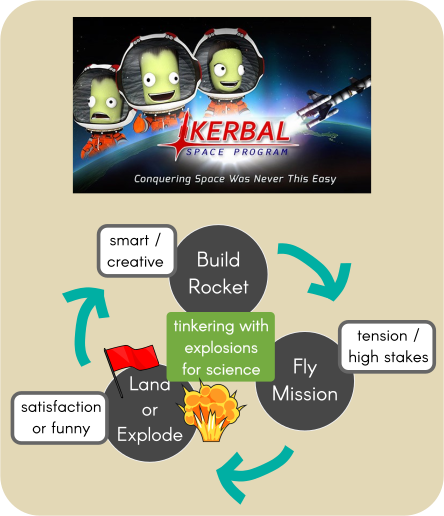 KSP has a particularly excellent core loop. There's preparation & creativity as you build a rocket and a sense of excitement and build up as you launch your rocket and try to exit the atmosphere. However, the thing that I think it does the best is to have a satisfying payoff on either success OR failure: you get satisfaction or a cool explosion, respectively. No matter the outcome, you're drawn back to the drawing board to try and do something cooler or to fix what went wrong.

Let's take a look at the one for Crescent Loom as it currently works in sandbox mode: 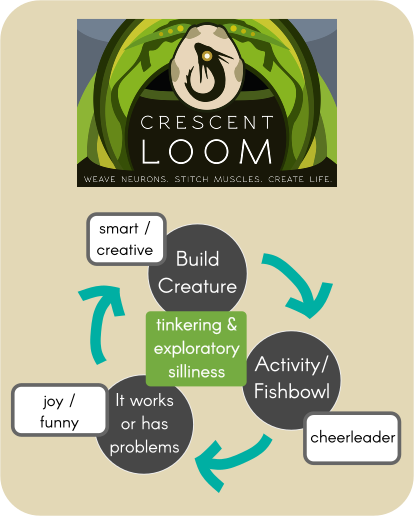 This loop is quieter than the one in KSP. They start out the same (building a creature/rocket) but instead of high-tension space missions, Crescent Loom offers a more passive experience akin to watching things swimming around in a fishbowl. You and poke and prod the creatures to see how they react until you find something to change, at which point you pause, re-enter the creature editor, and begin the loop anew.

Since the game offers so little direction, the player's motivation and rewards are internal. They ask "can I make something that does X?" and derive joy from just watching their creature swim around. However, self-directed play doesn't work for everyone. Without something obvious to work towards, or without some presented problem to solve, there's no fuel to keep people engaged with the loop. Once you finish a creature, it just sort of sits there and there's no sense of progression.

So! My goal for my two months in Sweden is to put together something for this sense of progression and to introduce players to the game. As I mentioned in the last wicklog, I'm thinking that this'll take the form of a series of series of levels/puzzles where you mend injured creatures. Here's my sketch of the first few levels:

I'm not sure about deletion / editing before how to add new parts, so the order may swap around some as I playtest.

Calling the creatures "creatures" has worked so far but it's a little... generic? I've played around with trying to come up with a specific name for them e.g. "Pokemon", but hadn't found anything I liked — but one of my housemates just suggested calling them "loominals" This:

It follows that the role of the player should be called a Loominologist instead of a Neuroweaver, which is what I've been going with up until now.

Too silly? Do I need a special name for the creatures at all? I'd love to hear what you think!